Sometimes, even in the summer, you feel like having a hearty soup with lots of vegetables. But one that tastes fresh and summery. Like this vegan Thai coconut soup with yellow zucchini: creamy and silky, fresh and spicy because of the fragrant Thai flavourings. 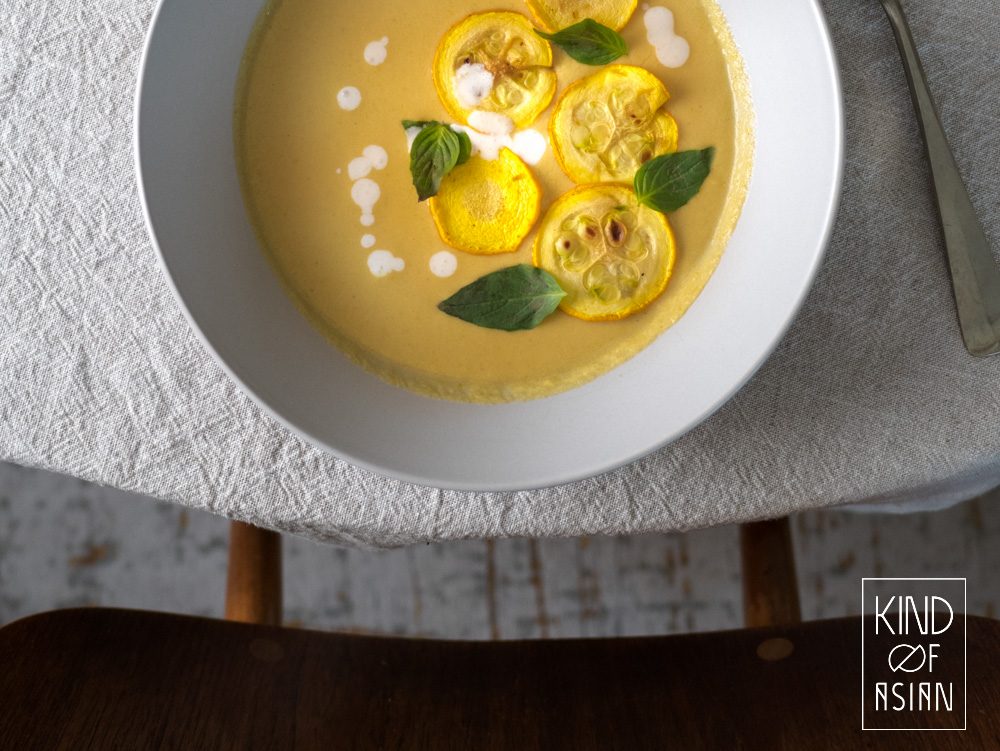 Inspiration for this coconut soup with zucchini: Tom Kha

This vegan Thai coconut soup with yellow zucchini is actually a ‘stuffed’ version of the popular Tom Kha. Part of the zucchini is mashed with the coconut milk.

Tom Kha is a coconut soup with lots of galangal (kha), the fragrant Thai ginger. The other characteristic Thai flavours of peppers, lime leaves and lemongrass are also present. For the savoury, chicken or shrimp and broth are used. And often tomatoes and onions are boiled along.

For the real Tom Kha, heat up all the ingredients in the right quantities and at the right time and your soup is ready.

“For you I made a vegan yellow zucchini soup version of the coconut soup Tom Kha. It looks and tastes like a soup in a restaurant but is not difficult to make.”

Maybe a little more difficult than just warming up all the ingredients in the pan. 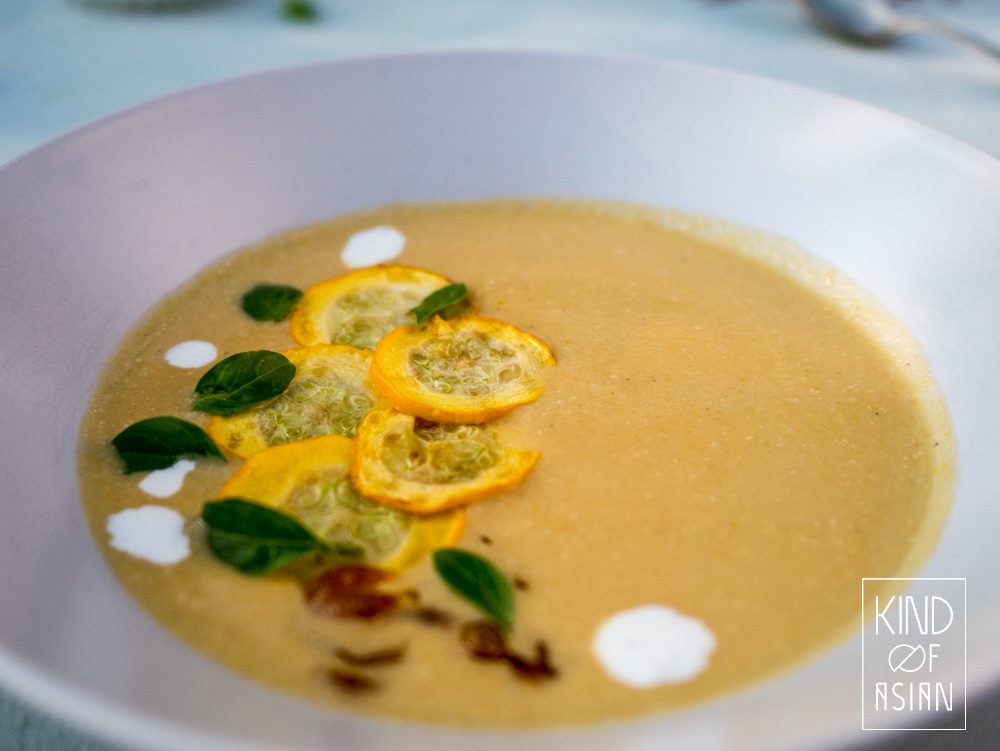 How to make this vegan restaurant style Tom Kha?

For this yellow zucchini version of the Tom Kha you also simmer galangal, lemongrass and lime leaves in coconut milk. But then you’re not there yet. 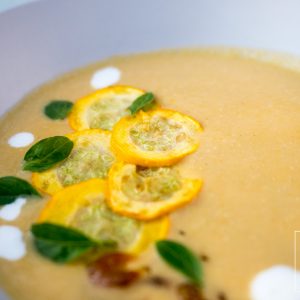 Sometimes, even in the summer, you feel like having a hearty soup with lots of vegetables. But one that tastes fresh and summery. Like this coconut soup with yellow zucchini: creamy and silky, fresh and spicy because of the fragrant Thai flavourings.

1. Roast garlic, chilli and shallot in a dry non-stick pan until everything is soft and with occasional black spots.
2. Puree in a small food processor or a hand blender with garlic, chilli pepper, shallots, oil, sugar and tamarind paste.
3. Put the puree back in the pan. And put the pan on a medium heat source.
4. Bake the puree until it has become a sticky chili paste. This can take up to 15 minutes. Stir regularly.

1. Put the coconut milk, laos and lemongrass in a pan large enough for the other ingredients.
2. Heat the coconut milk to almost boiling point. Leave to simmer for about 5 minutes. Stir regularly.
3. Pull the stalks off the lime leaves. Halve the leaves. Add the leaves to the soup and simmer for another 3 minutes.
4. Keep 4 tablespoons of the coconut milk, without the seasonings, separate to use later for garnishing. The rest of the coconut milk and the seasonings remain in the pan.
5. Heat a frying pan or grill pan with a spoonful of oil. Fry the zucchini slices until tender on both sides. Sprinkle with a pinch of salt and pepper.
6. Put the coarsely chopped zucchini (not the slices), chili paste and water in the pan with coconut milk. Bring to the boil and cook on a low heat until the zucchini is done. Approximately 6 to 8 minutes, depending on the size of the zucchini pieces. Turn off the heat source.
7. Remove laos, lemongrass and lime leaves.
8. Puree the soup smooth. Season to taste with salt and some lime juice.
9. Divide the soup over 4 deep plates and garnish with the slices of courgettes, fresh herbs, crispy shallots, etc.

Tamarind paste: if you don’t have this, leave it out of the chili paste. Just add (more) lime juice in the soup when it is ready. 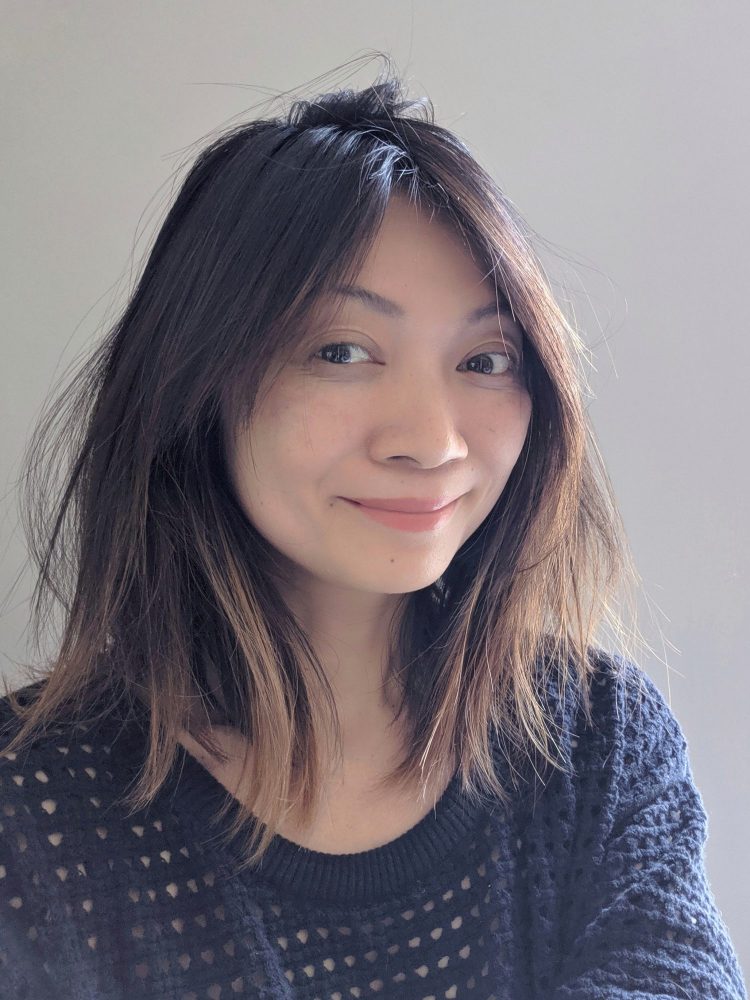 As a former restaurant owner and chef I can help you to cook easy, tasty & modern Asian dishes with less or no meat.

Here you’ll find healthy vegan and less-meat-more-veggies-recipes with Asian flavours. Not always authentic but with a ‘Kind of Asian’ twist!

Get updates directly in your inbox